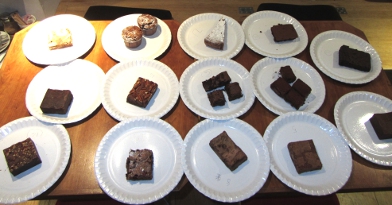 There is no doubting the Great British appetite for chocolate brownies. Around the country, brownies are sold in cafes, bakeries, chocolate shops and market stalls, with cyberspace, too, hosting a number of website brownie businesses.  Food blogger Helen Parkins (aka A Forkful of Spaghetti and A Kentish Kitchen), herself a brownie aficionado, feels that  the appeal of brownies lies firstly in “that perennial favourite chocolate. A good brownie will tick two very important boxes for people ‘chocolate’ and ‘cake’. I think it’s because brownies are usually (or should be) moister and more intense in flavour than chocolate cake that they’re more popular than chocolate cake.”  The fact that they’re portable,  convenient and not messy to eat are other, practical factors which she feels play a part in their popularity.

Keen to explore the brownie phenomenon, Chocolatier.co.uk gathered together a tasting panel  to sample a range of brownies from London’s best chocolatiers and bakeries. The panel was hosted by food writer Jenny Linford and included Bronte Aurell, founder of Scandinavian Kitchen, the much-loved Scandinavian café and food shop in London’s West End with a loyal following for its kladkakka (Swedish chocolate cake),  Jennifer Earle, a self-confessed ‘chocaholic’ and founder of Chocolate Ecstasy Tours, and Tim Fisher, an experienced pastry chef with a passion for baking with chocolate whose Twitter handle declares that he makes ‘the best chocolate brownie in the world’!

Looking at the array of assorted brownies – all presented anonymously -  on the tables, begged the question ‘What is a brownie?’ For Helen, a good brownie offers ‘an intense hit of cocoa; a distinct bite and chewiness; an almost mallow texture; and a wafer, paper-thin crispness to the top’. For Bronte, too, texture was important – “brownies should be soft, with a crust on top.” Chocolate-lover Jennifer feels that a brownie should be “densely chocolate with  slightly cakey cakes” and made from proper chocolate rather than cocoa.  Tim, too, favours real chocolate and had firm ideas on what made a brownie: “It should be gooey in the middle, it should have a crust on it and it should be dense and sticky in it. As to where the lines are in terms of the crust, gooeyness and stickiness,  that’s a personal choice and what makes it interesting.”

As the panel discovered, the brownies on offer differed considerably from each other.  Some brownies were firmly (or should that be squidgily?!) in the soft, rich, ganache-like camp, while others were much more cakelike. In addition to classic chocolate brownies, there were numerous flavoured variations, many of them staying faithful to the nut and chocolate theme traditional to brownies. The good-quality ingredients shone through, that was for sure. In the end, though, when it came down to matters such as texture and sweetness, it’s all very subjective. So, we suggest you get out there and get sampling! You’re spoilt for choice!

Chocolatier.co.uk would like to say a big thank you to the members of the tasting panel for their time and careful consideration and to Scandinavian Kitchen for kindly hosting our tasting.

A classic brownie,  both in appearance and in texture.  Favourable comments on the crust on the top. Texture and flavour “good”,  “pleasant”, “balanced”

A traditional brownie in appearance and texture with the traditional crust on top and bottom, eliciting a “well baked” comment from Tim. The panel felt the texture was “good” but that it was “not hugely chocolatey”.

In appearance, a noticeably high-standing, substantial-looking brownie. Interestingly, this brownie, as the panel noted, lacks the traditional ‘crust’ on top and bottom, presenting instead a smooth surface.  “This has been baked quite slowly to keep it moist and  gooey,” observed Tim. The soft rich texture and flavour elicited “fudgy texture,” “very chocolatey”, “tastes like ganache”, “would make a great dessert”, “very good ingredients”

The appearance of this brownie, which is dusted in cocoa powder, got a mixed reception: “The most inviting-looking of the lot,” enthused Bronte. “Just wrong!” said Tim, flatly. Thumbs up, however, for the soft texture, with a crust on top and bottom. “Very, very good texture” was the panel’s verdict. The touch of salt and addition of chunks of milk chocolate gave a caramel finish, which half the panel liked, while others found a “tiny bit too sweet”. The consensus was very much that this was very more-ish brownie indeed and that “the quality of the ingredients comes through”

Konditor and Cook Brownie with Cranberries

Nice appearance with good crinkled crust on top and a crust underneath. “Well baked”, observed Tim approvingly. “Very good texture” all agreed, but the panel didn’t like the addition of the cranberries.

Striking in appearance with its cream-coloured, cheesecake spiral on top of the brownie. “Good crust”, “very good texture” but “muted chocolate flavour”.

A classic brownie in appearance, pale in colour, with a crust. The texture  when sliced was soft and yielding. Studded with hazelnuts and chunks of gianduja, this won plaudits for its flavour and texture- “delicious” was the verdict across the board. “Very balanced and good-quality ingredients”, “a treat”, “I like the way it’s cakey at the edge and soft in the middle,” observed Jennifer. “Baked very well” approved Tim, though he felt the hazelnuts could have been toasted more.

With its distinctive, fudgy texture, it was felt that this was ”like eating a nice frosting”. “You get the salt right at the end”,  “good quality ingredients”, “very rich”. Would be a great accompaniment to a shot of espresso.

Studded with pecan pieces, the panel were particularly taken with  the “salty” flavour of this one, which they felt worked well with the soft, yielding texture and the sweet chocolate flavour.  “A ganache-style brownie”, “rich, fudgy texture”. “generously conceived”.

A classic brownie in appearance, complete with a surface crust. The orange flavour went down well with the panel. “Good flavour”,  “very pleasant”, “more like a cake, than a brownie”, “I like it”. “very easy to eat”.

Round in shape and baked in small, individual cases, this stood out from the crowd in appearance. Very light and sponge-like in texture, studded with pieces of walnut, this elicited an ‘is it really a brownie?’ conversation among the panel, who agreed it was on the cake side of the spectrum. “Very pleasant to eat,” “nice as a mid-morning snack with a cup of tea”.