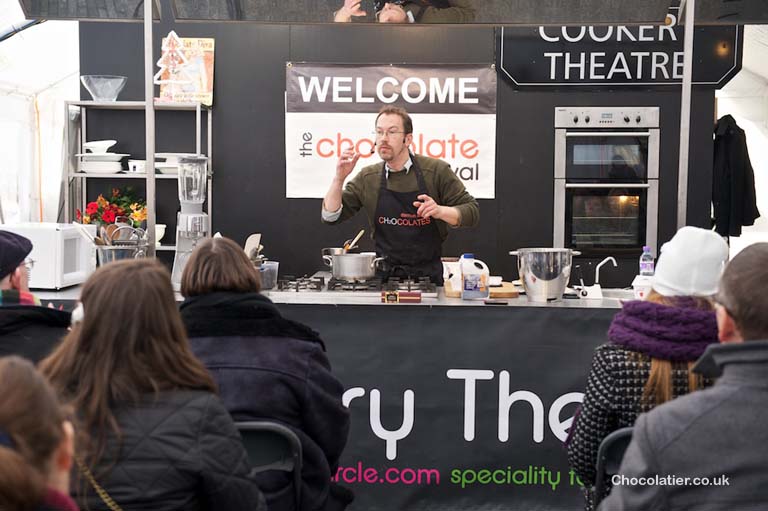 Founded in 2009 by chocolate-enthusiast Yael Rose, the Chocolate Festival is now a regular addition to the South Bank’s calendar, with the December event the perfect place in which to indulge in some chocolate-themed Christmas shopping.

The range of stalls at the Chocolate Festival – selling everything from chocolate bars and mugs of warming hot chocolate to chilli con carne (with a touch of chocolate, naturally) and chocolate brownies – is witness to the British love affair with chocolate.

Particularly noticeable and exciting is the depth of home-grown British talent on show, with chocolatiers and chocolate companies such as Damian Allsop, L’Artisan du Chocolat, William Curley, Demarquette, Duffy’s Red Star, Paul Wayne Gregory, Paul A. Young and Rococo all supporting the event. 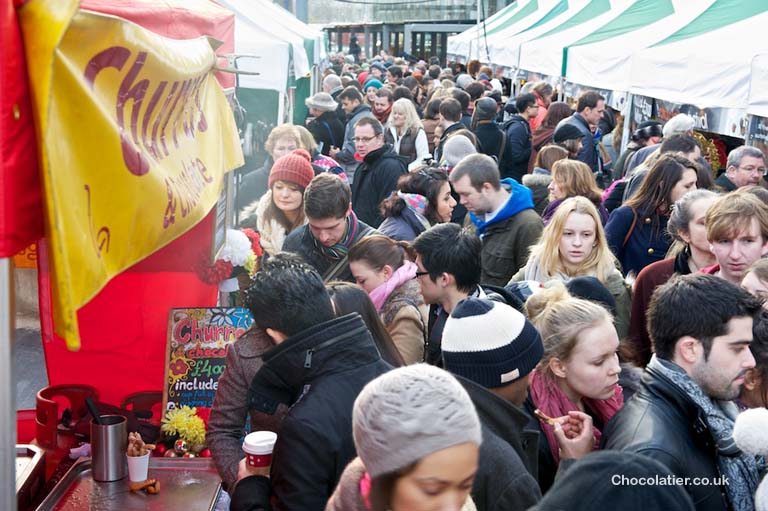 For the chocolate makers, the Chocolate Festival offers the chance to bring out new flavours and get some valuable feedback from the public. Valrhona, noted for its high-quality chocolate much used by chefs and patissiers, this year offered visitors the chance to attend a Valrhona Chocolate Tea; “we wanted to try something new,” explained Valrhona’s Marie Van Branteghem. On offer from Andrew Gravett, Valrhona’s talented UK Pastry Chef, was a selection of exquisite offerings, from a panncotta flavoured with Dulcey (Valrhona’s new caramelised white chocolate offering) to a morello cherry macaron, which tasted as good as they looked.

In the Chocolate Cookery Theatre, Paul Wayne Gregory gave an insight into the amount of work which has gone into his latest offering, a Christmas Pudding truffle, offering tastings to gauge people’s reactions.

With its programme of events, the Chocolate Cookery Theatre also offered a chance to learn about chocolate, whether doing a tutored tasting with Martin Christy of Seventy%, watching demonstrations by notable chocolatiers such as Damian Allsop Paul A. Young or taking part in an entertaining but informative Chocolate Quiz, hosted by Sudi Pigott, Ambassadress for Original Beans, and Valentina Harris.

Above all, by putting the public in contact with chocolate makers, the Chocolate Festival offers a chance to show our appreciation to these talented chocolatiers. As chocolatier Damian Allsop said at the press launch, “The best chocolatiers in the country are out there. They work hard all year and they need support.”