Stroll along Monmouth Street and your eye might well be caught by simple yet striking window display – an open leather suitcase containing some colourful bars of chocolate, Welcome to Coca Hernando’s latest pop-up venture. 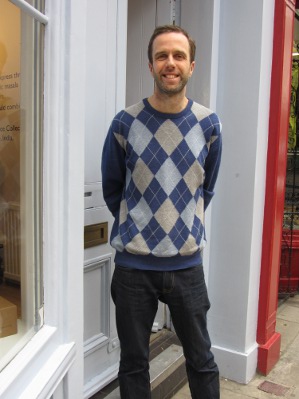 Launched at the end of March, 2013, Cocoa Hernando is the brainwave of Paul Tomlinson. “My chocolate is inspired by travelling around the world,” explains Tomlinson, “I went to India and the whole idea for Cocoa Hernando came together on a train in India trying some chair and wondering how that would combine with chocolate.” Each of Cocoa Hernando’s four bars have a travel element to them – from the Himalaya bar, made from milk chocolate flavoured with pink diamond salt, to Morocco, dark chocolate with spearmint.

The striking packaging is something Tomlinson is very proud of. “I’m inspired by that Deco vintage travel era – it was a beautiful era of design. I knew exactly what I wanted and commissioned someone to do the designs for me. In development of the brand, I came up with the character of Cocoa Hernando, so there’s writing on each bar where he describes his travels into that country and the flavours he finds.”

Following a successful launch at Somerset House, Tomlinson was keen to find “another nice spot” in which to promote Cocoa Hernando, so thrilled to be in Covent Garden. “At the moment, getting the word out about Cocoa Hernando is the most important thing.”