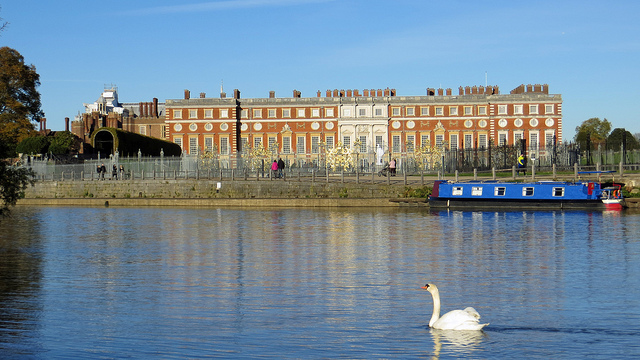 A fascinating insight into the role chocolate played in British royal households opens today to the public at Hampton Court Palace. Usually, this huge, grand and historic building, is associated with Henry VIII and Tudor banqueting, with the wonderful Tudor kitchens here a draw. Hampton Court, however, also has a Baroque aspect which is less well known and today sees the public opening of the eighteenth century Chocolate Kitchen, just off elegant Fountain Court, where King George I’s own personal chocolate chef Thomas Tosier worked, the first time a Georgian kitchen here has opened to the public.

The story of how the Chocolate Kitchen was uncovered is one of historical sleuthing, a triumph of much patient work by the historians and curators working at the Palace. Marc Meltonville, Food Historian, Historic Royal Palaces, explained to Chocolatier, that “the legend” that there was a chocolate kitchen off Fountain Court was well-known. “Our first job was to find out if there was any truth to the rumour. Sadly with any large building, people attach a name to an area, almost at random sometimes.” The team set to work, poring through archives, account books and ledgers.

Evidence  that there had been chocolate cooks at the palace, “turned up quickly” in the accounts.  Then, the team discovered Thomas Tosier, chocolate chef to King George I. Such was chocolate’s status as a luxury ingredient at the time, that the King brought in his own special chocolate chef to prepare it for him.  Tosier cleverly makes the most of his special role. “Not only does Tosier work for the King, he has a chocolate shop in Greenwich that his wife Grace manages. He’s using the fact he cooks for the king to create a ‘brand’ and she is very switched on about managing it.”

The next “breakthrough” in locating the chocolate kitchen came in summer 2013. “One of our curators found a document listing the rooms anticlockwise round the courtyard from the Queen’s Staircase. That Staircase still exists and so do the doorway, with doorway number 10 being the King’s Chocolate Kitchen, so with that we were off.” When the team went to investigate the room at doorway number they found it “filled with  steel shelving holding vases for flower festivals; you couldn’t see much.” When they pulled out the shelving, fully expecting to find a “blank canvas”, the historians  instead found to their excitement that “the kitchen was still there.”  There was original shelving, a folding table, attached to the wall, a set of charcoal stoves and a fireplace with the grate still in it, “with the key that turned the adjustable cheek [a mechanism which allowed users to adjust the size of the fire] lying on the side,” says Marc happily. 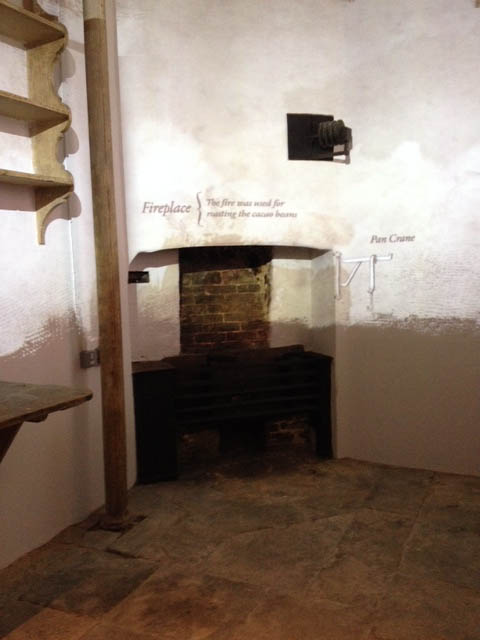 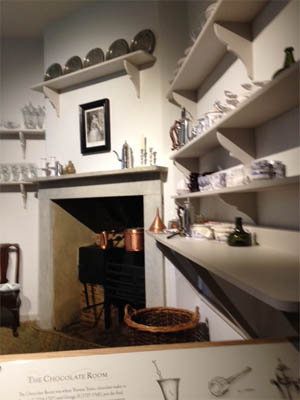 Visitors to Hampton Court will now be able to visit the chocolate kitchen and see for themselves how well it has survived the passage of time. “Because it was so perfect, we didn’t want to add anything else in, so we’ve decided to project images onto the wall to show you what it would have been like,” explains project manager Aileen Peirce, a device which works very well. “There’s a smokejack within the chimney, which would have been driven by the smoke to turn chains and drive the spit. In the early eighteenth century this is state of the art, like Heston’s Fat Duck kitchen today, proper, high-end kitchen technology. The metalwork conservator said the gear ratio on this is far faster than anything he’s seen before.” 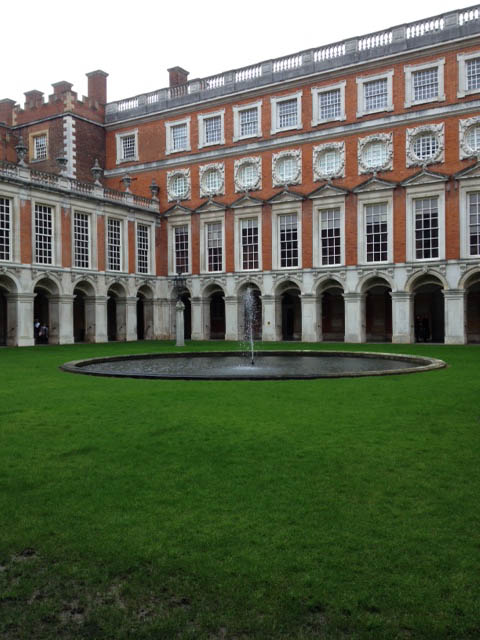 Across the corridor from the kitchen, visitors can see a replica kitchen set up, with “Mr Tosier”, impressively bewigged, busy at work,  with cocoa beans and spices such as vanilla, grains of paradise, aniseed, chillies and allspice on the counter before him. The ‘chocolate’ that was being prepared for King George I took the form of a hot chocolate drink, a reminder that for the majority of its long history chocolate was transformed into a beverage rather than the solid confectionary we are used to eating today. The cocoa beans were ground whole, without the cocoa butter being extracted, giving the drink a rich, creamy texture and it was sweetened and flavoured with aromatic spices. “Chocolate was ludicrously expensive,” explains Aileen, “difficult to prepare and very special. This part of the Baroque palace, off Fountain Court, is home to sophisticated and elegant dining, the Spicery, the Confectionary and, most glamorous of all, the Chocolate Kitchen.”

Not only was there a chocolate kitchen, the team have also uncovered the location of the Chocolate Room nearby. “This is where the chocolate chef, Mr Tosier, would have done the final preparations.,” explains Polly Putnam, curator, Historic Royal Palaces. “The chocolate drink would have been brought from the kitchen and he would have poured it into a silver pot or, indeed, a gold one, there are records of oneThe shelves in the Chocolate Room are lined with carefully researched and beautifully crafted reproductions of the equipment used at the time. “This room was used for storage of expensive items,” says Polly, “with advanced shutters for extra security.” The distinctive bulging chocolate cups were reconstructed based on fragments of broken pottery found when Hampton Court moat was excavated. “My favourite thing,” she says “are the six silver ‘chocolate frames’ which I came across a reference to and wondered what they were.” It turns out they were elegant silver cup holders. The chocolate would have been whisked at the last minute, with a mollinet, specially made for the purpose. Chocolate chef Thomas Tosier would then have had the privilege of taking the drink up to King George I for breakfast.  “Normally, from Tudor to Victorian, the chef never sees the diner,” points out Marc, “this is the only example I’ve come across. He gets to see the King, which is incredibly valuable.”

Chocolate in the early eighteenth century was very much a luxurious drink, more expensive than coffee and enjoyed by the elite of the day. “ Chocolate houses are where the rich and famous go to let their hair down,” explains Polly. “The Tosier’s chocolate house in Greenwich, fronted by his wife Grace, became the place to go to.” Such was the power of the Tosier ‘brand’ that even after he died and Grace re-married, she kept his name. 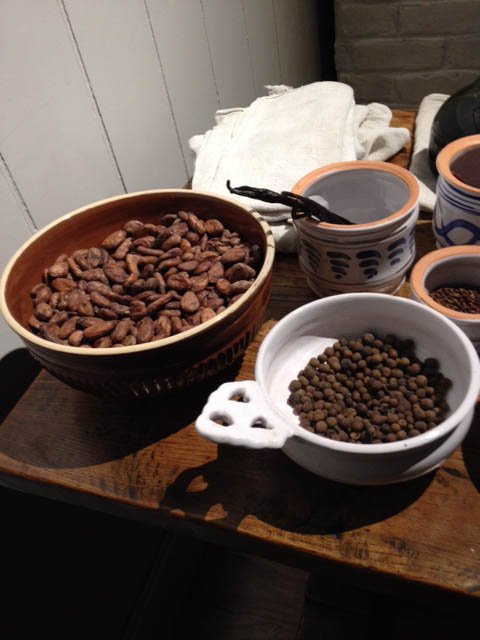 Thoughtfully, Hampton Court Palace, having tantalised visitors with these glimpses of how chocolate was enjoyed as a rich beverage by royalty during the eighteenth century, are offering them the chance to sample special hot chocolate in the Fountain Court Cafe. Visitors can taste for themselves how hot chocolate has changed over the centuries by buying a ‘hot chocolate flight’, offering ‘original’ based on a 1662 recipe, Georgian (a version of the King’s Chocolate), Victorian and a futuristic one.

2014 is the 300th anniversary of the Hanoverian succession, when George I came to the throne. Here at Hampton Court Palace, the amazingly preserved Georgian Chocolate Kitchen offers a wonderful glimpse into the King’s private life and the world of below stairs at the court. It also offers a real insight into how chocolate has always been regarded as a treat. 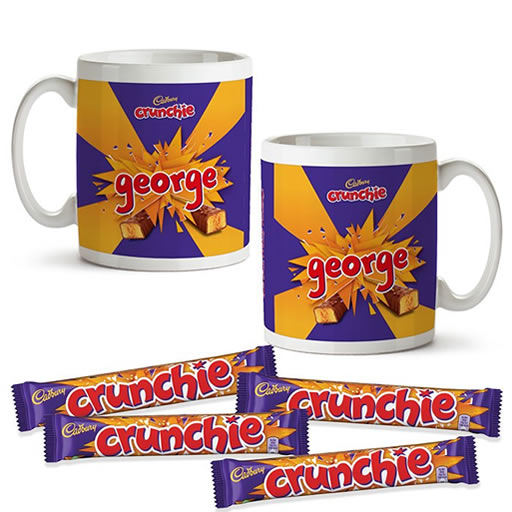 Getting Personal is the home of personalised gifts, and their range of chocolate gifts are ideal for all events and occasions. Find a range of bespoke chocolate gifts that create more impact than your average box of chocs.

Shop at Getting Personal°