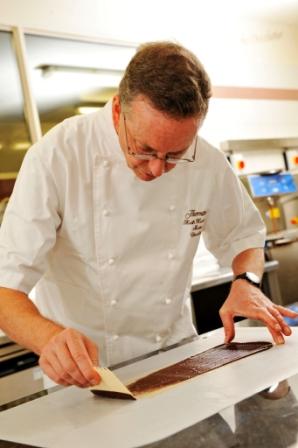 Thorntons' Master Chocolatier, Keith Hurdman was recently presented with the Chocolatier of the Year award, the industry’s most prestigious prize. But he started out on the awards trail young.

By 19, he had already won a national prize for bakery. "At that age, it is hard not to believe your own publicity" he says with a broad smile.

"I thought I was really good. I had studied bakery, confectionery and pastry work in the UK and then, I went to Switzerland to find out that I was OK, nothing special."

The young Hurdman had learned a crucial lesson about the invaluable importance of targeted schooling and quality of training. It’s just as important now, he explains.

"Chocolates have become very fashionable, so you have people who went to university to study mechanical engineering for three years who suddenly decide to do a three-day chocolate course and become chocolatiers."

After a brief pause, he checks his head briefly. His smile has vanished.

"It does not work. I don't want to sound patronising and I might be wrong, I might be conservative.

“But to be successful, you really, really, need a solid base and a pastry chef background will give you one."

Now he speaks with passion about his profession. "The best chocolatiers have a background which involves chocolates. Let me clarify. To my knowledge, certainly in France, the UK and Switzerland, chocolatiers start off with a pastry chef background and chocolate is a component of pastry work."

Could he have stayed in the UK for his training? "I went to Switzerland to learn about pastry work, in particular, because at that time, it was the best country in the world for patisserie.

“Whether it is now or not, it's open to debate. But it is still one of the great chocolate countries."

1998 was a watershed year for Hurdman. He was recruited to teach at the Richemond Confectionery School, a centre of excellence for confectionery and one of the world's great schools for chocolatiers. "They only take people on that they consider of good quality, I was the first foreigner to teach there."

Teaching with the world's best chocolatiers would prove to be an inspiration and a confidence booster for his future career.

"When I read interviews of chocolatiers in this country, they all say, ‘I worked with this chef and that chef,’ not chocolatiers,” he says.

“In 20 years, I would like to read interviews with some young guy or girl who has been training with Paul Young, William Curley, or any other famous chocolatiers working in the UK. because that carries far more weight than big chefs."

Hurdman is happy to break the traditional mould around food professionals and their culture of secrets. "Anybody can approach me for advice, I don't have any secrets for anything, I am happy to share."

"There is no point having secrets,” he continues. “It shows insecurity. This culture of secrets was in the past when chefs moved from one place to the other with their guarded recipes.

“But now, there is some excellent technical material out there. If I didn't want to give you, say, my salted caramel recipe, somebody else would. Or you could download one from the internet. What is the point?," he laughs.

Time flies when Hurdman explains the geography of chocolate tastes in Europe.

"Switzerland is a very interesting country in its make-up and influences.

‘There are demarcation lines. Latin people like dark chocolates, the German, the Dutch, the British prefer milk chocolate."

But consumers' taste are changing. "Dark chocolate is growing strong in this country but from a very small base," he explains.

"The majority of the UK population prefer milk chocolates. There is a ready market which buys expensive dark chocolates, but the majority is conservative.

"Things change slowly. It is getting there, but you know, it won't be happening tomorrow."

Satisfying and serving the majority reflects in Thorntons’ sales.

“Our chocolate bars and chocolate blocks are very good products. They are sophisticated products. Without being patronising, if I make something which sells 200,000 bars, then we’ve moved the market a little bit more in that direction."

Thorntons is building on traditional flavours to develop new products.

"Classics is a brand of well-known flavours, popular with the British market. It may not be particularly exciting but people like fudge, caramel and toffee.

“For the summer we are redeveloping good traditional flavours - Bakewell tarts, banana custard, good crowd-pleasing flavours. We’ve just added a lemon sea salt chocolate block. Maybe the London crowd thinks, ‘well, we have seen it before’ - but north of Watford, they haven’t."

Combining affordability and quality can be a difficult balancing act. It starts with cocoa suppliers, Hurdman says.

"At Thorntons, we can buy in very large volume, say, five tonnes a time. We get a very good chocolate, at a reasonable price, suitable for the mass market.

With all his experience and a myriad of interesting things on the go, would Keith Hurdman consider starting his own business?
"I am a bit cursed with being a perfectionist. If I want to do it, it has got to be done properly with all the equipment, like they do on the continent.

“Then you need to look for a backer - somebody with a great deal of money. That does not grow on trees."

"If I had a shop, I would open a shop in Zurich. Second choice London, third New York.

“However New York is expensive, London is ridiculously expensive and Zurich is off the charts.

“So you probably will have more chance of me opening a shop in New York than in London, but that’s only down to the financial considerations." 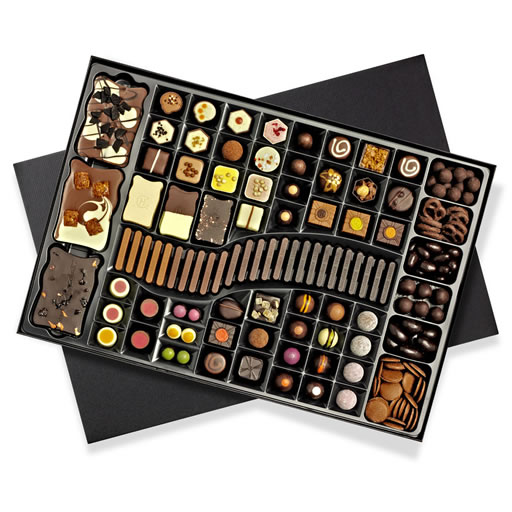