Pistachios. They're a delight in ice cream, halva, biscotti, mortadella, and, of course, baklava. So it's fair to say, mortadella aside, that pistachios were born to be incorporated into sweet products.

Chocolate and pistachios makes perfect sense, and some producers have run with the idea, blending pistachios with honey° or strawberries. But today I'm reviewing a far simper recipe from Lindt that promises to put pistachios front and centre. Or does it? Read on to find out. 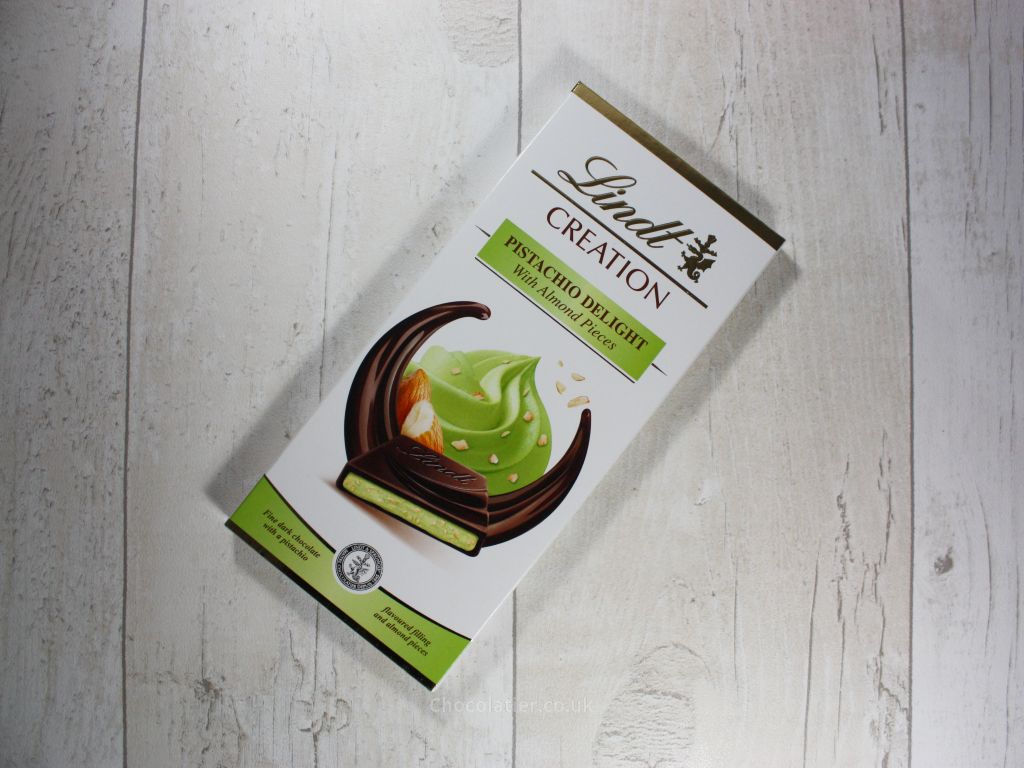 This weighty bar from Lindt comes in at 150g so stands out on the shelves against the slender 100g alternatives. Pistachio Delight is part of the Lindt Creation collection, an expansive range that seems to have evolved into quite a substantial line. Other flavours I found on Google include tiramisu, chocolate cake, crème brûlée, lemon, and raspberry.

The packaging on all Lindt Creation bars follows the same template. A sturdy, deep white cardboard box envelops the chocolate bar. The front of the box features gold foiled printing, helping the bar to stand out on the shelves. The colour varies by flavour, and it's no surprise that Lindt opted for a pale green to represent pistachio. The graphic placed front and centre on the box shows an illustration of a segment of the bar, with chocolate horns (or wings perhaps) framing a swirl of pistachio cream, with a couple of almonds tucked to one side. Bear this in mind for later.

The rear of the packaging is home to the ingredients in English, Polish, Italian, and German, as well as the nutritional information. Here's what's in my bar:

Spotted the quirk of this bar yet? 10 points to you if you did. And it's not the barley malt extract - although I have absolutely no idea what its role is in this particular bar. 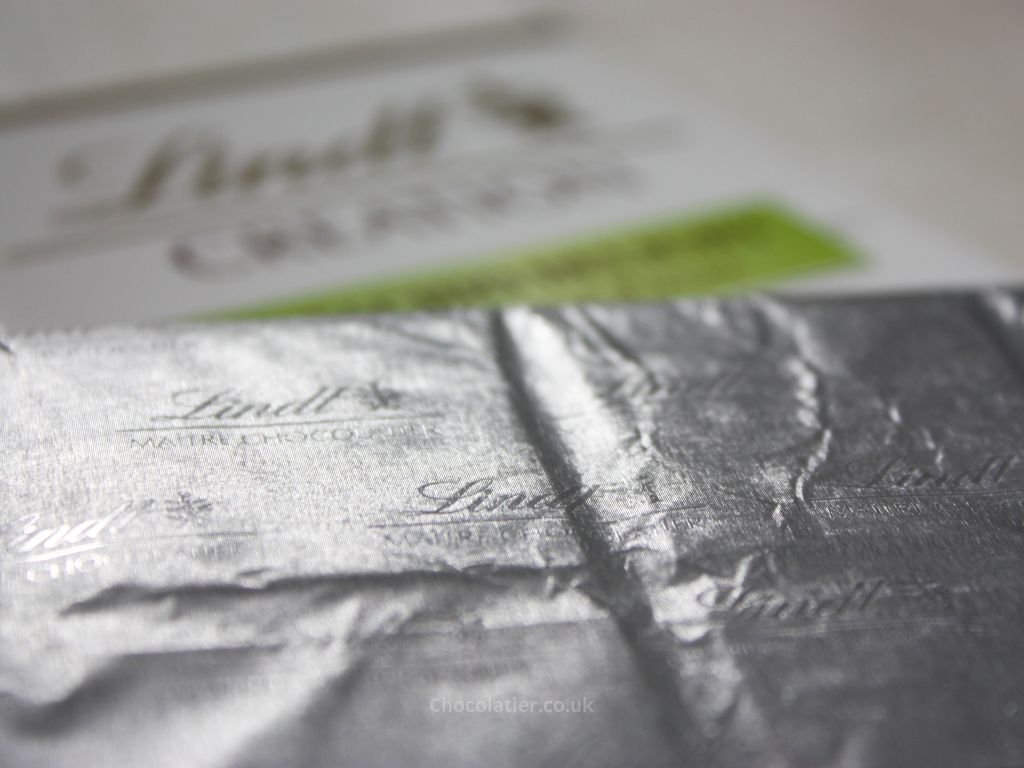 The chocolate is sealed in a rather nice thick silver foil, which has a woven texture to it and the Lindt logo repeated again and again. Beneath this cover is a bar of dark chocolate formed into 10 segments. Each of the noticeably deep segments resembles the box illustration, with the Lindt logo formed into the chocolate along with a swoosh pattern.

The initial aroma is incredibly sweet, which is slightly disconcerting given the bar is made with dark chocolate. I was expecting earthy and fruity tones but instead picked up hints of vanilla and bag loads of pistachio. There was no mistaking this bar was pistachio flavoured, although the scent did have a certain synthetic quality to it. 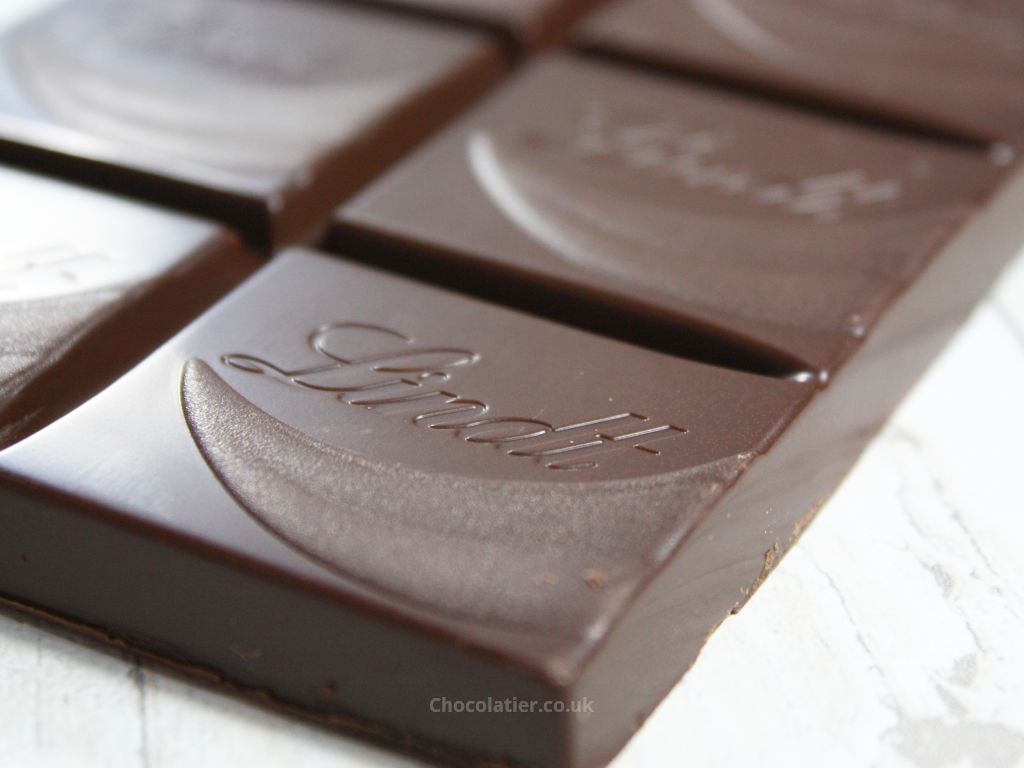 A crisp yet delicate snap maked portioning this bar a doddle, and also revealed the thin layer of green paste inside.

I bit into this chocolate and that sweet aroma punched me in the face. This bar was ludicrously sweet - far sweeter than I like. And that sweetness took over all aspects, from the aroma, through to the taste, and into the aftertaste. I craved something savoury afterwards to wrestle my senses back down, as well as to mask the acridity that lingered after swallowing.

The sweetness appeared to originate in the dark chocolate but was accentuated by the sugar-based paste in the centre. 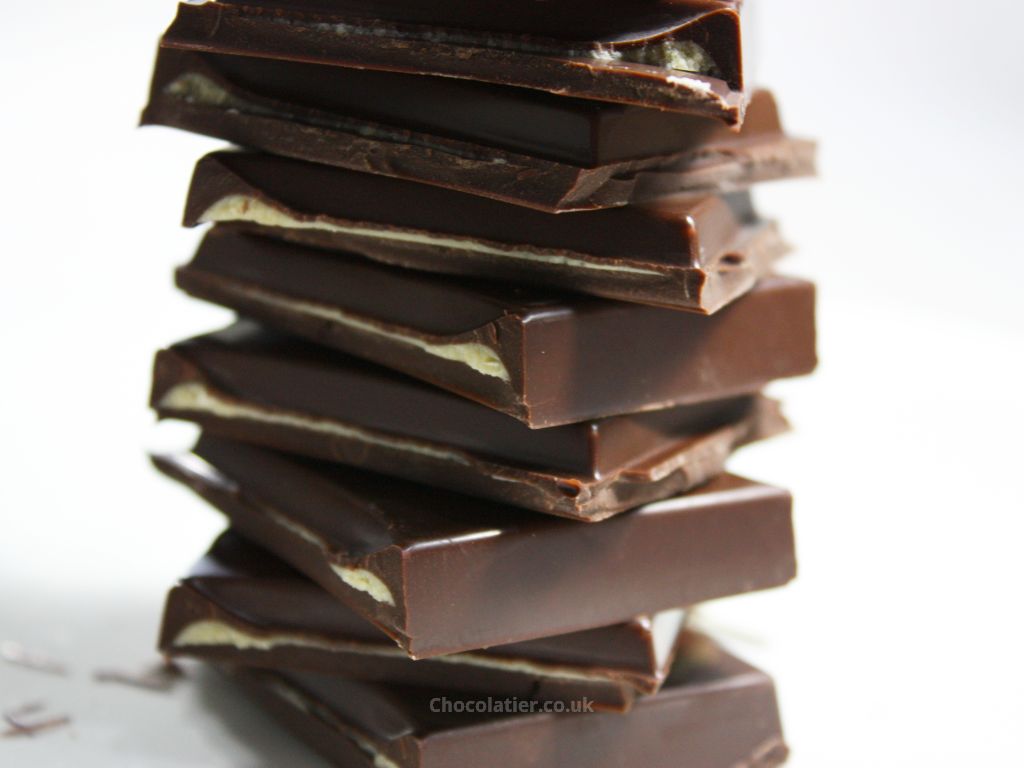 The texture of the almonds was pleasant enough - in fact they were barely noticeable apart from the odd piece here or there. The pistachio flavour was identifiable but wasn't as pronounced as it was in the aroma. 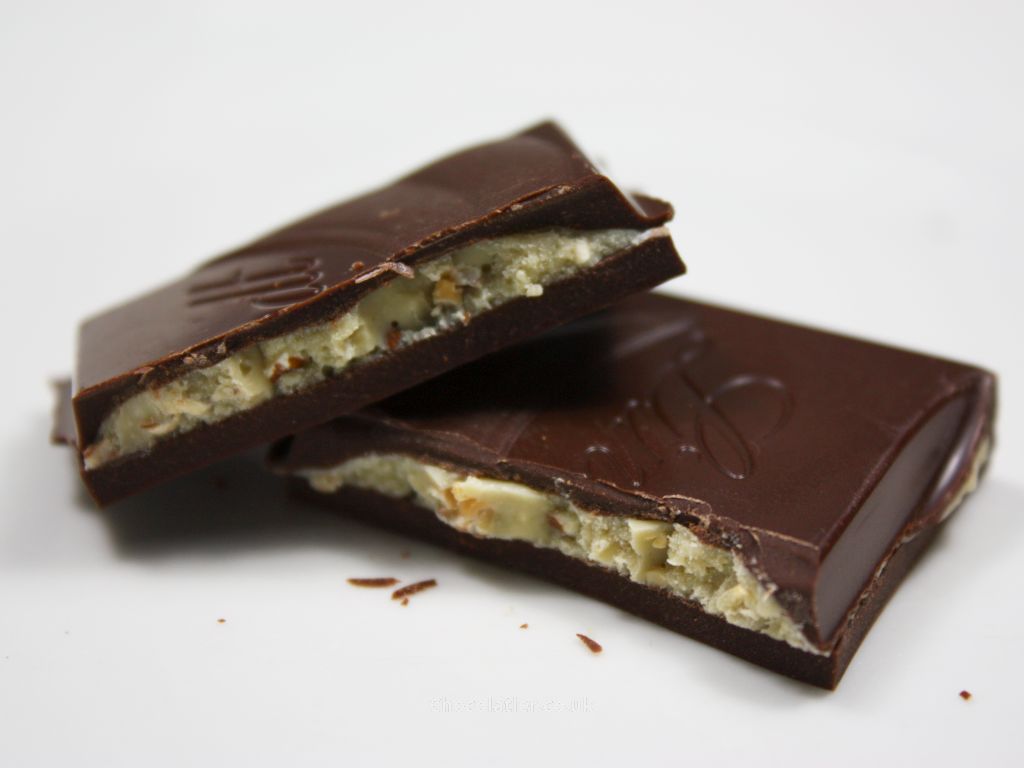 I feel the problem with this whole arrangement is that as a bar, there's around 45% sugar content. There's nothing in the recipe to rein in all that sweetness. The bitter notes of the dark chocolate (which behaves more like a milk chocolate) are outwitted by all those sugars.  It's just not bitter enough to balance the sugars to level out the profile of this bar.

I'm really not a fan of this bar. I love pistachios and pistachio-based products, but this bar was way too sweet for my liking. I wanted something to swoop in and combat all that sweetness, or for it to contain less sugar and more cocoa, adding a bitter depth to the chocolate. I'd also love to see the almonds booted out in favour of real pistachios too. I purchased the bar on the naive assumption that it contained real pistachio pieces. Alas, I should have read the small print on the box.

This bar is definitely one for the kids or one for you if you have a very sweet tooth. If you're not a fan of dark chocolate but love pistachios then you may find that this bar is perfectly suited to you as the chocolate behaves more like a milk chocolate than a dark chocolate.

Sadly this bar just doesn't do it for me, and I'm yet to find my chocolate pistachio heaven.

Disclosure: I paid £2.49 for a Lindt Creation Pistachio Delight 150g bar from my local Lindt store. My opinions are my own. 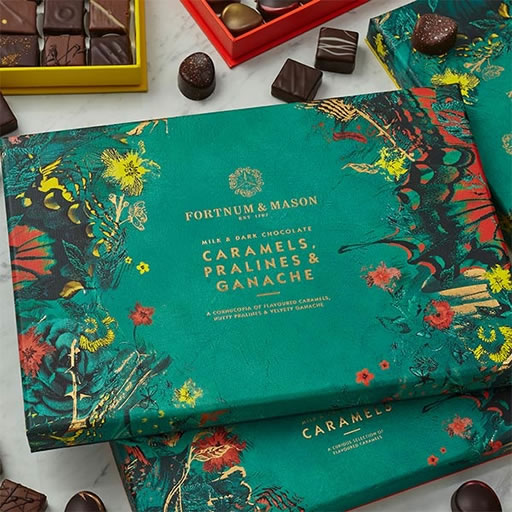