London-based chocolatier Amelia Rope is known for her striking, chocolate bars, with their simple but effective flavour combinations, for which she has a loyal following. 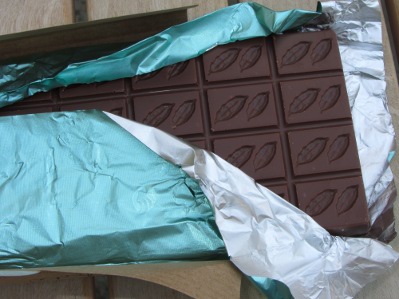 Amelia Rope has an eye for packaging, with her chocolate bars at once distinctively pared down but also elegant and appealing. Here the brown paper outer wrapper with text in chocolate brown contrasts nicely with the glint of an eau-de-nil metallic wrapper underneath.
Unwrapping it, the chocolate bar itself is visually appealing as each square has a pretty indented pattern of two cocoa pods. The bar itself is noticeably thick and substantial, just under 1 cm thick, and studded with sizeable pieces of pecan nut, including halves, embedded in the chocolate. Eating it, one gets first sweet caramel notes, than a perceptible salt presence coming though. As the chocolate melts in your mouth, buttery, toffee notes linger on. The honey-coated nuts – with their subtle honey sweetness – go well with the rich, in fact, almost nutty flavour of the milk chocolate, which, thanks to the nicely judged presence of the sea salt, is not overly sweet.
VERDICT: NUT AND MILK CHOCOLATE GIVEN A LUXURIOUS, ELEGANT MAKE-OVER 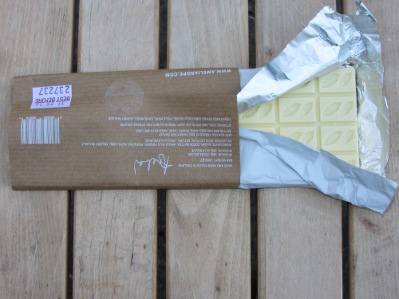 Amelia Rope White Edition 3 white chocolate, pistachio nut and Maldon sea salt
Here the understated packaging consists of a pale brown paper wrapper printed with white text, with a white foil wrapper used to wrap the chocolate bar.
The white chocolate bar is ivory-coloured, again noticeably substantial at just under 1cm in thickenss, with each square indented with two cocoa pod indentations, creating a subtle textured effect, and studded with pieces of green pistachio nut. The scent of vanilla is noticeable. It has the soft texture characteristic of white chocolate and the flavour is mild – a pleasant dairy sweetness with those vanilla notes noticeable and a mild pistachio flavour and pockets of saltiness. The firm texture of the nuts contrasts pleasantly with the creamy texture of the white chocolate. The pistachios, with their naturally subtle taste, offer more texture than flavour.
VERDICT: AN EASY-TO-EAT BAR, PERFECT FOR LOVERS OF GOOD WHITE CHOCOLATE 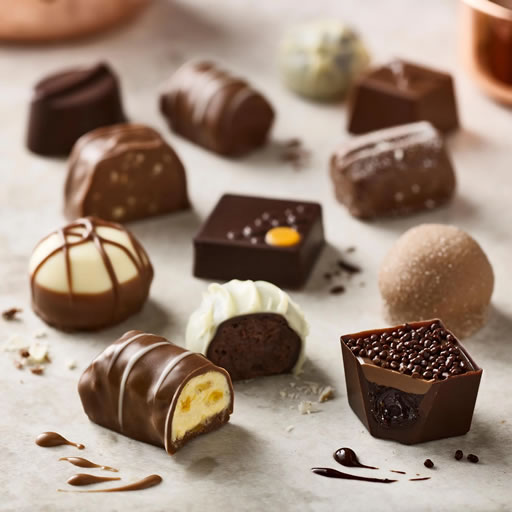