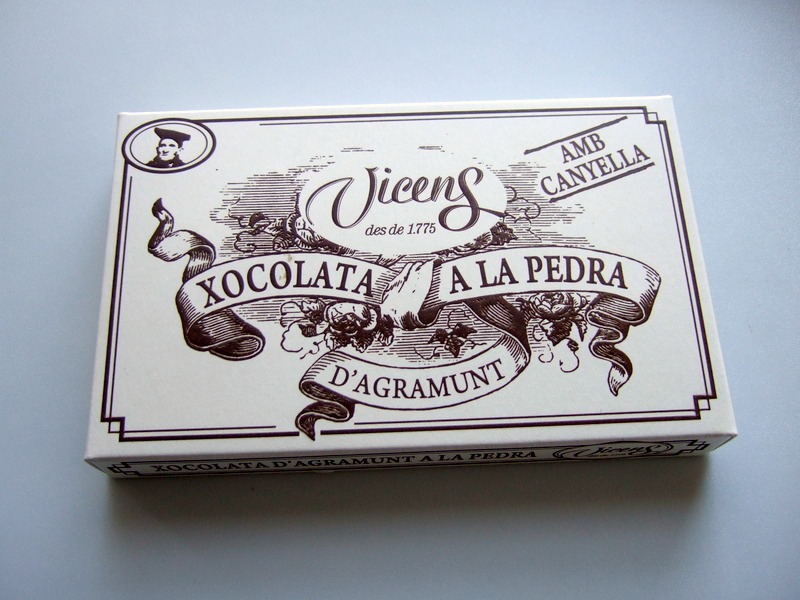 There's hot chocolate. Then there's Spanish hot chocolate. And then there's arguably the most authentic of all hot chocolates, xocolata a la pedra, which takes its name from the way the chocolate slabs used to be made. Pure cocoa beans were toasted over a fire, and then ground - while still hot - to a fine powder on a large grinding stone, using a heavy stone roller.

Given Spain's history, the Spanish and Catalans do, of course, know a thing or two about hot chocolate. Amongst the best at making xocolata a la pedra are the people of Agramunt, in west Catalonia, who have been perfecting the technique for the past two hundred years or so. Although some mechanisation has necessarily crept into the production process in recent years (production by hand would never keep up with demand), the basic artisanal method has remained unchanged.

Vicens make two versions of xocolata a la pedra: one scented with vanilla, and the other with cinnamon. The one sent to me for review is the latter.

To make the xocolata, you need to grate a couple of squares from the slab into warming milk. A couple of boils of the milk, a few stirs, and some unavoidable anticipatory drooling later, and you're just about there. It takes a while, so if it's an instant drink you're after, this isn't for you.

But as with so many things in life, if you're prepared to be patient, you'll reap the rewards. And the reward here is a drink that easily outclasses your regular hot chocolate.

Speaking as someone who regularly drinks 100% cocoa without any added sugar, I'm personally pleased to find that the xocolata is not at all sweet, and perhaps not even quite as chocolatey as I expected, although there is distinctly rich cocoa on the finish. The cinnamon, thankfully, is finely measured, at little more than a whisper. And given that this is a Catalan product, you won't be surprised to learn that it has a smooth, almost crème anglaise-like texture (with just a touch of graininess that comes from the grinding process) that lends itself to dunking. If you happen to have some churros to hand, so much the better.

It all adds up to an intense, dark and delicious chocolate nectar of the kind that is likely to have you whimpering for more. 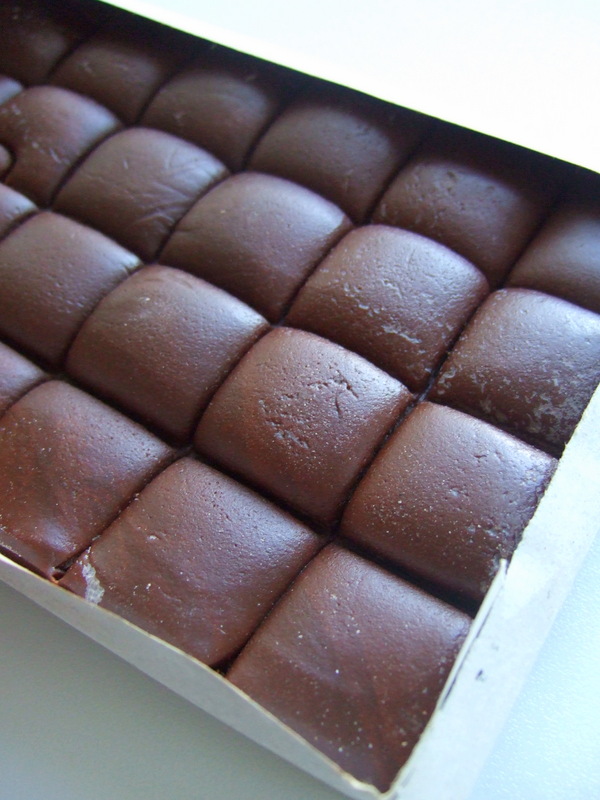 As with the xocolata, the Agramunt region is recognised for its torró, to the extent that Torró d'Agramunt has recognised protected geographical (PGI) status.

It's not just any old torró, this, even on first sight. It looks quite unlike any other I've set eyes on before, but in a good way. It's a spectacular knobbly brick of a bar, dusted liberally with salt flakes, pimenton, and tomato powder. Even before I've started, I've a feeling it's not for the faint hearted. Fortunately for me, I've never been the nervy type, especially when it comes to chocolate and nuts.

Any torró is, of course, all about the nuts, whether ground to a fine paste or left whole or roughly broken up. This particular torró has them in bucketloads - huge Marcona almonds from the heart of the Catalan almond-growing area, toasted to perfection, and bound together by chocolate. Having lost a fair percentage of their water content in the toasting process, the nuts shatter readily on cutting or biting into the bar, so it's all rather easier to eat than you might anticipate.

Chocolate, tomato powder, pimentón, and salt all combine in one mouthful give a tremendous initial umami hit, which then transforms into a surprisingly fruity taste. Fortunately, the dark bitterness of chocolate (70% cocoa) has enough more than enough presence to stand up these distinctive flavours, as well as to the creaminess and caramelisation of the toasted nuts. It's a cleverly made bar, carefully and well balanced, and incredibly moreish with it.

There is, however, just one minor problem - if it can really be called that - inasmuch as you might find yourself munching on an overwhelming cluster of salt flakes or clump of tomato powder. My first mouthful certainly suffered from the former. So I'd advise giving the bar a quick inspection before you tuck in, so that you can redistribute any obvious clusters.

It's not what you'd call cheap, but I'd readily buy it for an after dinner or something-to-nibble-in-the-afternoon treat. I'd suggest buying it to share with friends, but frankly I'm not sure that you'll want to part with any of it once you've tried it for yourself.