Bean-to-bar chocolate maker Solkiki has been on my radar for a while now, and earlier this year I picked up a few of their bars to try.

One bar I thought most befitting of a review ahead of Christmas was a 70% dark chocolate bar studded with crumbs of Ontbijtkoek - not that I knew what Ontbijtkoek was at the time.

Ontbijtkoek literally translates as "breakfast cake". Often spiced with cinnamon, ginger, cloves, and nutmeg, this Dutch delicacy is traditionally eaten in place of bread at breakfast, slathered with butter.

Now it has made its way into a limited edition micro batch chocolate bar. Could this be the perfect antidote to all the Christmas spiced chocolate bars around right now?

The 56g bar arrived inside a brown and orange themed carton. I believe the box is for the Kablon 70% dark chocolate bar and has been adapted for the Ontbijtkoek bar by means of an orange sticker on the front.

The Solkiki logo sits on one side while Academy of Chocolate and Great Taste award stickers line the opposite side.

"Kablon 70" sits at the bottom with "rich and mellow" tasting notes beneath this. There's also text that explains this is a single-estate bar made in micro batches using directly-traded cacao.

The sides of the box contain the additional tasting notes of "mild, spice, and fruity" as well as details about the cacao. The Trinitario cacao heralds from Kablon Farm in South Cotabato, West Philippines.

On the reverse of the carton, there's an introduction to Bob and Iris at Solkiki, as well as the ingredients list in English and French. As I stated above, I believe this box has been adapted for the Ontbijtkoek bar as it doesn't feature Ontbijtkoek in the recipe, so I've grabbed this ingredient list from their website:

The nutritional information on the box (35% sugars) again relates to the Kablon 70% bar so doesn't take into account the flecks of Ontbijtkoek inside this bar.

This chocolate bar is vegan. It contains gluten and is made in a kitchen that handles nuts and soy products.

I love having as much information about the chocolate to hand as I can, so it's great to discover loads of information contained inside the carton, accessed as you unfold it. Not only is it a great way to engage consumers with the brand, it's especially handy for recipients to understand why this isn't your average chocolate bar if you are giving this one as a gift.

There's an introduction to the 65-hectare Kablon Farm, which specialises in a variety of organic crops in the Phillipines. The cacao trees grow beneath the shade of other trees and plants, including coconut, mangosteen, guava, jackfruit, durian and passion fruit. These all impart characteristics into the terroir which helps shape the cacao properties. Solkiki reckons its 70% Kablon bar demonstrates banana and red jam notes alongside biscuit flavours.

I particularly like the table of categorised flavour notes which will help you identify the characteristics you pick up while savouring this chocolate.

Lastly, there's a detailed section on ethics and quality of ingredients. It's abundantly clear that Solkiki cares about its farmers, its cacao, and its chocolate bars, as well as the planet.

The bar itself is sealed inside a heat-sealed metallised plastic wrapper to ensure freshness. Mine put up a good fight but I eventually won!

The dark chocolate bar is formed using a bespoke Solkiki chocolate mould, with the logo forming patterns across the face of the bar.

Even though it weighs in at just 56g, this bar still feels quite generous in size, with a chunky 7mm of depth.

The aroma is a curious one for a 70% dark chocolate bar, and is difficult to nail down. Woody, vegetal and earthy notes come through but there's an almost savoury quality that sits to one side. Look beyond this and you'll find glimmers of banana and juicy red fruit.

The bar itself has a nice shine to it and has a crisp snap. Despite it's size, I managed to get around five portions out of this bar, nibbling on a few pieces each time.

A faint hint of ginger comes through first on tasting, followed by buttery biscuit notes. There's a flood of rich cocoa notes along with hints of red fruit. Meanwhile, the crunch of the Ontbijtkoek reveals itself as bursts of gently spiced goodness, with cinnamon and nutmeg in the fray.

The chocolate exhibits a mild bitterness from the beginning but this quickly fades out in the build-up to the end. The aftertaste is clean and smooth, with the mild spices at the forefront, rich cocoa notes underneath, and just a hint of sweetness for good measure.

There's a lot going on in this bar. It is a loud and busy symphony of festive and chocolate flavours but they are orchestrated to work harmoniously together. The spices and crunch from the Dutch Breakfast Cake play against the biscuity and fruity notes of the Kablon cacao. It's a fun yet grown-up chocolate bar that demands to be savoured thoughtfully.

If you are looking for a sophisticated festively-spiced chocolate bar this Christmas, this masterpiece by Solkiki fits the bill perfectly.

The packaging contains a wealth of information. The chocolate itself is characterful, and pairs beautifully with the crunchy nuggets of Ontbijtkoek, with fruity, biscuity festive flavours galore. This is a sophisticated, grown-up Christmas chocolate bar. This bar will fill you with bags of Christmas spirit any time of the year.

Have you tried either of the 70% Kablon bars? Let me know what you thought of the chocolate in a comment below.

Disclosure: I purchased a 70% Kablon Ontbijtkoek Dutch Breakfast Cake Dark Chocolate bar from Solkiki for £7.25. I was not asked for a review. My opinions are my own.

I received an email from John asking which UK chocolate makers use Peruvian white cacao beans to make their chocolate. I instantly headed to my list of bean-to-bar chocolate makers to find out who stocks such bars. Solkiki's 78% Dark... 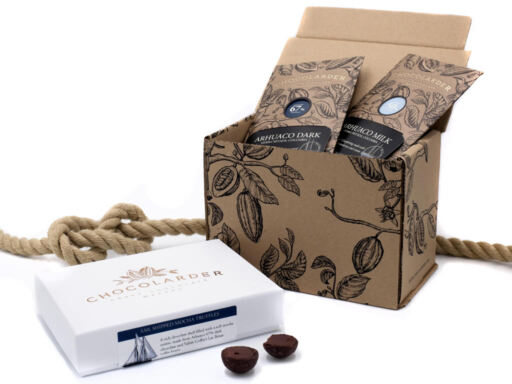 I'm sure very few chocolate lovers have looked beyond the bar at the cocoa supply chain. One aspect rarely discussed is the colossal amount of food miles cocoa typically travels between farm and shop. Cocoa generally grows within ten degrees... 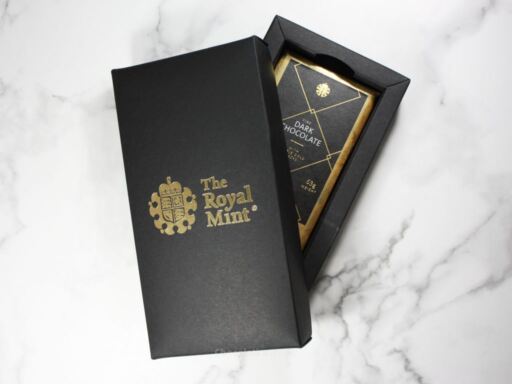 Cast your mind back to June and you may remember I wrote about Bullion Chocolate's collaboration with the Royal Mint to produce a Chocolate Gold Bar Gift Set. Bullion by Bullion was the theme. At the time, I reckoned it... 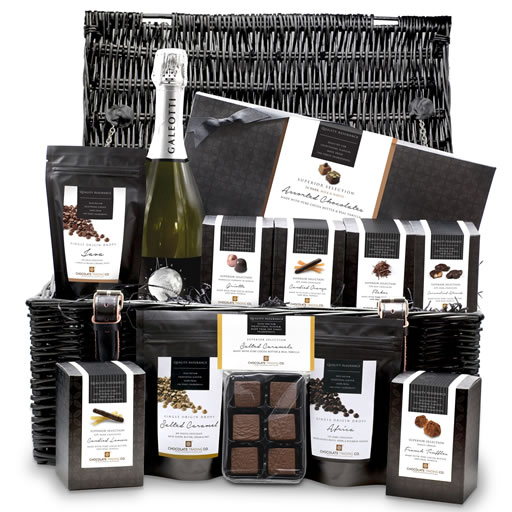