Valrhona, the French chocolate company, is highly regarded within the world of pastry chefs both for their high-quality chocolate and, importantly,  for the practical support and training the company offers to patissiers working with their chocolate.  This Christmas, Valrhona has teamed up with twelve leading UK pastry chefs at establishments including hotels, restaurants and patisseries in a project showcasing both their considerable pastry skills and the scope offered by chocolate. Each of the chefs were challenged to create their own new take on France’s traditional ‘bûche de noel’ (a Yule log-shaped concoction) using, naturellement , Valrhona chocolate. Each of these bûche will be available to order at the establishments taking part in the challenge, offering chocolate-lovers a very special festive treat.

The chefs embraced their challenge with considerable creative flair – coming up with twelve very individual  Bûches, all of which looked wonderful  and tasted delectable. Luke Frost of Coworth Park in Berkshire, for example, has  created a naturalistic-looking chocolate log, adorned with chocolate leaves,  flavoured imaginatively with sarsaparilla and damsons, partnered with Valrhona’s Bahibe milk chcolate and Dulcey Blonde.  Eric Rousseau of Patisserie Belle Epoque  embraced the Christmas theme with witty style, topping his bûche with ornamental Christmas baubles, which are, in fact, edible ‘pear pearls’ 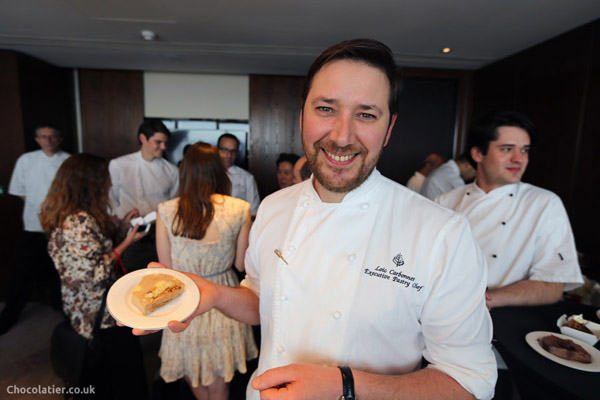 Loic Carbonnet from The Four Seasons

Many of the pastry chefs used fruit to elegant effect to contrast with the richness of the chocolate.  Loic Carbonnet of The Four Seasons combined a lemon sponge with Valrhona gianduja, Regis Negrier of The Delaunay used Grand Marnier and marmalade with Guanaja mousse, while mango and passion fruit gave a tropical note to Lewis Wilson of The Ritz’s stylish creation.  Nicholas Patterson of The Shangri La also has an exotic element, featuring yuzu, mango and coconut.  Sarah Barber of ME London went for a black forest gateau theme, contrasting cherry jam with Manjari and Opalys, Andrew Blas of Café Royal’s Bûche combined a mandarin and Nyangbo mousse with hazelnut cream and using Ivoice Chocolate. Nuts, too, were a popular component, with John Grantham of Restaurant 61 majoring on chestnut and Valrhona Jivara cream,  Joseph Wagenaar of The Andaz  partnering Bahibe and Kalingo chocolates with a smoked pecan praline and Mourad Khiat of The Berkeley used pear with peanuts and Guanaja mousse.

Award-winning pastry chef Cherish Finden, Executive Pastry Chef at Langham, has come up with an eye-catching bûche, entitled Magic By Moonlight, featuring  Santa Claus and his reindeer-drawn sledge flying over a winter scene. It’s a colourful creation, with a bright orange moon contrasting with the deep red mini bûche landscape.  Inspired by the Valrhona project, “a brilliant idea and I love using chocolate“, Cherish says her first task was “to come up with the idea.  My initial thought was to make it magical, so we came up with the name Magic By Moonlight. From the name, I created a cake in which we have Santa Claus delivering his presents to the children on Christmas Eve.” Cherish had a clear vision of what she wanted her bûche to do. “First of all, it was for children, the big children as well! Secondly, I wanted it to stand out from the rest of the bûches, so we went for the colour contrast.” 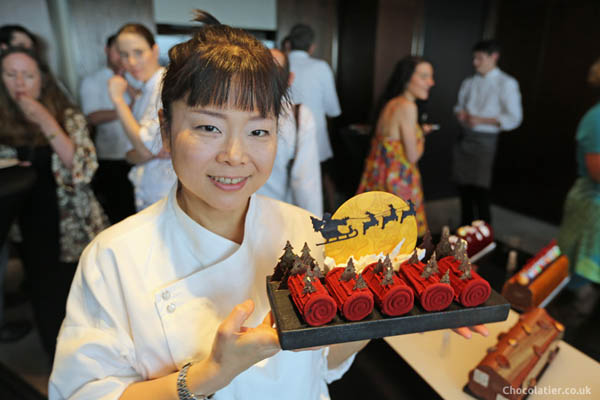 When it came to the flavour of her bûche, Cherish explains that she “wanted to showcase the beauty of Valrhona chocolate, so I used Kalingo chocolate.  I love Kalingo chocolate, the intenseness of its aroma. It’s also a grand cru chocolate, which is why I chose it. When you eat my bûche, the taste of the chocolate is very intense.” The bûche will only be available in a limited edition, because of the amount of skilful work involved. “ It’s very labour intensive because of having to cut out the elements individually – the Santa Claus, the forest, the reindeer.  It’s a lot of work to put together.” Cherish thoroughly enjoyed the Valrhona bûche press event, at which all the pastry chefs, together with their spectacular creations, were present. “It was such fun to see what people had come up with,” she enthuses happily. “You always learn from other pastry chefs.” Valrhona’s  imaginative Christmas Bûche challenge has certainly got our talented UK pastry chefs’ creative juices flowing. 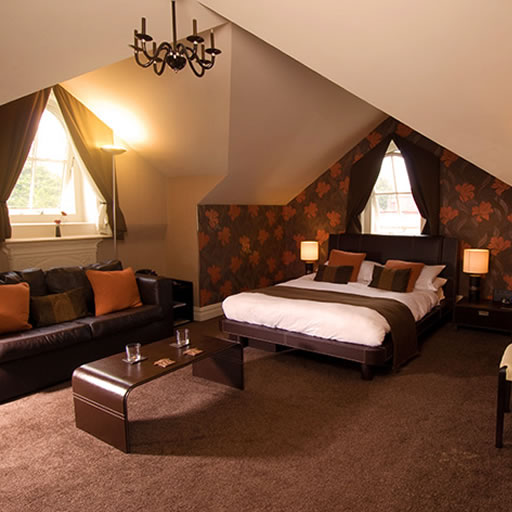