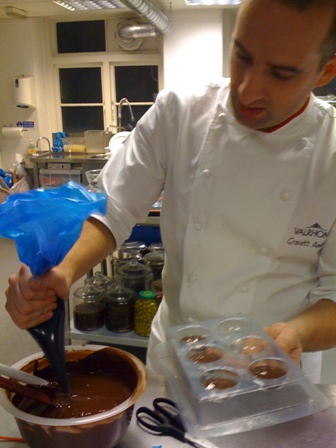 In the world of fine chocolate, Valrhona is a major player,  used by professional chefs and cookery schools around the globe.  Excitingly for British chocolate-lovers, 2012 sees Valrhona bring their cooking with chocolate classes to our shores.  “We want to share our passion with as many people as possible,” explains Marie Van Branteghem. “We are known for the training and back-up we offer to our professional customers and our classes for the public are very popular. Before, if people wanted to do a Valrhona chocolate cookery class they had to go to France and the class would be taught in French, so we wanted to offer an English language option in Britain.” With interest in chocolate on the rise in the UK, Valrhona are also making part of their professional range of products available to the general consumer, with their cooking chocolate feve (beans) now sold in 1kg bags.

Given Valrhona’s credentials, it was very exciting, therefore, to be invited to a press preview of the Valrhona’s cooking class, held at Rosalind Rathouse’s centrally-located Cookery School on Little Portland Street. Avoid wearing suede came the briefing  - we were going to be cooking with chocolate and it could all get very messy!

Our teacher was Andrew Gravett, Valrhona’s Pastry Chef for the UK and Scandinavia. Gravett proved to be an excellent teacher, down-to-earth, humorous and accessible while at the same time  a mine of expertise on chocolate and how to cook with it. “The first thing we say about our chocolate, is taste it,” he began and we tasted our way through the range of Valrhona cooking chocolate beans, from dark to white, each with their own distinct flavour and a long finish on the palate. Particularly striking was the dry-textured Coeur de Guanaja, with its intense dark chocolate flavour; “Our technicians spent years working on this. We wanted a chocolate that you could use in ice cream which would deliver a strong flavour while allowing a softer texture to the ice cream. This is a very technical chocolate.” For Gravett, the key to Valrhona’s quality is both the flavour it delivers and its ‘clean’, ‘non-greasy’ texture.

Introduction over, Gravett then got us working, helping him make an array of chocolate creations, from Earl Grey-flavoured truffles to salted caramel and chocolate tartlets. These recipes were designed to introduce us to some of the basic principles involved in working with chocolate and confectionary, including a simple way of tempering which doesn’t require a marble surface, making caramel (he recommends adding the sugar in stages) and how to make marshmallows. Gravett’s meticulous approach to cooking with chocolate and patisserie was evident throughout – especially so when, with justifiable pride, he brought out his own-made, pre-baked pastry cases, so immaculate and evenly-baked that a fellow chef had asked him where he had sourced them from.

When it came to making the ganache for the truffles, there were several insights to be gained. Gravett uses French UHT whipping cream – “This gives softness but not a creamy flavour. I want to taste the chocolate, not the cream; it’s there for the texture.”  He had cold-infused the cream with Earl Grey tea overnight, rather than hot-infusing which might give a bitter flavour. The butter in the ganache ‘should be cold’ and it’s “very important to boil the cream properly”. Gravett uses honey as an ‘ invert sugar’ which will help retain moisture and give a creamy texture. Blending the mixture is a brief step ‘but will make a huge difference – you want the friction to bring it together ’.  While blending, however, you need to stop getting too much air into the mixture as this would adversely affect the keeping properties of the truffles. Once the ganache mixture was blended, he turned it out between two layers of plastic; “I spread it out in one layer so that it sets evenly”. This was set aside at room temperature, then later, while it was still pliable, it was piped into tiny mounds. Gravett made the piping look effortlessly easy, but it proved to be trickier than he made it look. “Always keep the pressure on the piping bag; retwist it to stop it going up the bag,” he exhorted. The ganache balls were set aside to ‘form a skin’. The final step was coating them with chocolate – a gloriously messy procedure which brought out our inner child as it which involved having a dollop of tempered chocolate in our gloved hands and rubbing it over the ganache mounds  - simple, but satisfying, we agreed.

We left with a pile of chocolate goodies to take home with us – deliciously tangible treats from our Valrhona session. Having access to Andrew’s knowledge – being able to ask him questions from how to stop chocolate seizing to whether one should invest in a probe thermometer for tempering (the answer is yes) – had made the class very special. “We want the people doing our classes to be able to talk and participate, that informality” explains Van Branteghem. “I like teaching,” says Gravett, “I’m not trying to sell you a product. I tell you how to work with it. That’s how Valrhona works all over the world.”

The first Valrhona Chocolate Masterclass will at Cookery School on March 15 2012 . 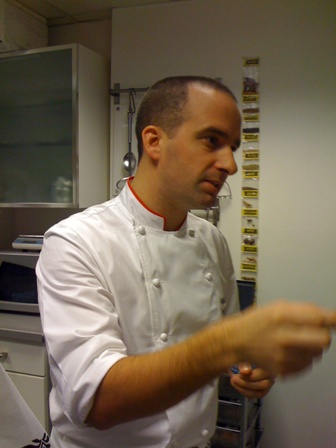 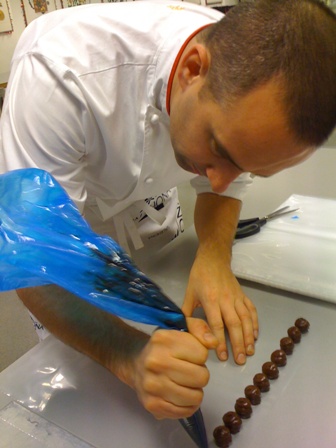 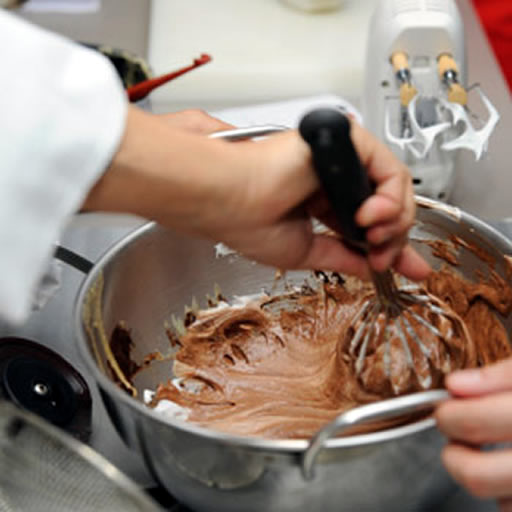