Among the joys of working with chocolate (and, indeed, eating it) is that it can be flavoured in so many different ways. In addition to the many flavours present in quality chocolate itself, chocolatiers and chocolate manufacturers have a huge range of ingredients to use – a rich palette of flavours to work with. One of the classic flavour combinations is chocolate and orange – represented across the chocolate spectrum from artisanal to mass-produced.

Think of the continuing success of Terry’s Chocolate Orange – launched in 1930 and formed in the shape of an orange, complete with segment-shaped pieces – or Fry’s Orange Cream, filled with sweet, sticky orange fondant. ‘The combination of chocolate and orange,’ writes flavour guru Niki Segnit in her seminal book The Flavour Thesaurus, ‘has endured where other once common flavourings, like black pepper and anise, have faded into obscurity.’

In this, the first of a new series for Chocolatier.co.uk exploring flavour groups, our correspondent, Jenny Linford, set out on a taste voyage to explore how orange is used in the world of chocolate. Orange, it turns out, can be added in various forms – from essential oils or pieces of candied orange peel added to chocolate bars to marmalade or orange-infused ganaches and is often used to add texture as well as flavour. Here, in alphabetical order of maker, are her findings. 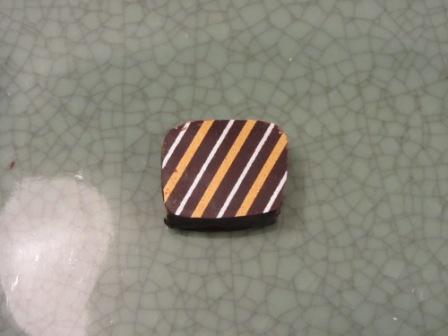 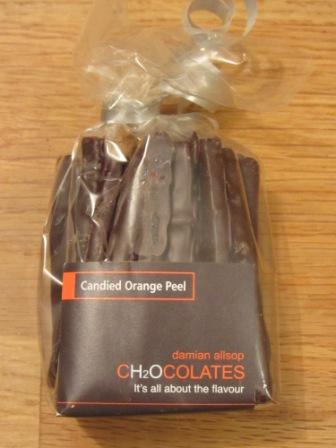 Packaging: a small, labelled, clear cellophane bag through which one can see the neatly packed array of small, chocolate-coated orange peel batons
Appearance: slender, knobbly ‘twigs’ of dark brown chocolate
Orange element: the strips of candied orange peel inside the chocolate coating
Aroma, flavour and texture: a faint whiff of orange and chocolate on opening the packet. Inside the noticeably fine dark chocolate coating the candied orange peel is soft, with the orange flavour present but not dominant, sweet, but not-oversweet, retaining a freshness to it. A pleasant, slightly acidic, lingering finish.
Verdict: an elegant, more-ish version of a classic combination 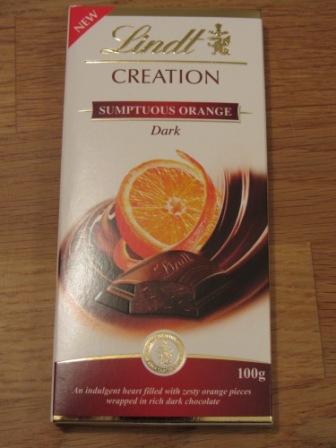 Packaging: neat box – a white background picture of orange in a swirl of dark chocolate.
Appearance: the dark brown chocolate bar is divided in large, plump, slightly curved rectangles, with Lindt incised on each rectangle.
Orange element: the orange zest filling
Aroma, flavour and texture: on opening the silver foil wrapping, there’s a noticeable sweet orange aroma. Biting through the dark chocolate (cocoa solids 47%), there’s a soft, fudge-coloured filling, with a slightly rough texture from tiny pieces of candied orange peel. The flavour is sweet with a pleasant orange flavour coming through.
Verdict: an appealing contrast of textures and balanced flavours – very easy to eat.

Appearance: a small, glossy, dark chocolate rectangular ganache, brushed with green and orange.
Orange element: the blood orange flavouring within the ganache.
Aroma, flavour and texture: a chocolate aroma with a herbal note. Biting into the clean-textured, light-brown ganache filling, one gets an immediate zingy hit of thyme with blood orange notes coming through as the thyme fades and an acidic chocolate finish.
Verdict: exciting to eat, innovative, refreshing. 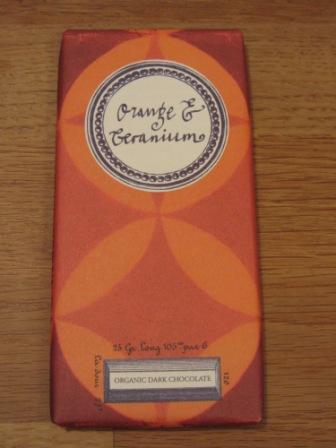 Packaging: Rich orange-hued matt paper wrapping, with a pattern inspired by the Moroccan tiles in Rococo’s Motcomb Street shop
Appearance: Dark brown chocolate with a noticeable gloss to it. The bar has been divided into small, indented, tile-shaped squares with a central tile inscribed with Rococo.
Orange element: pieces of crystallised orange peel and orange essential oil
Aroma, flavour and texture: On unwrapping the silver foil, a rose aroma is apparent. Biting into the firm-textured chocolate, studded with little bits of orange peel, one gets first an orange hit and then a lingering floral note from the scented geranium, finishing with dark chocolate notes and a slight rasp of chocolate acidity.
Verdict: an intriguing and sophisticated combination of flavours, with the quality of the chocolate noticeable. 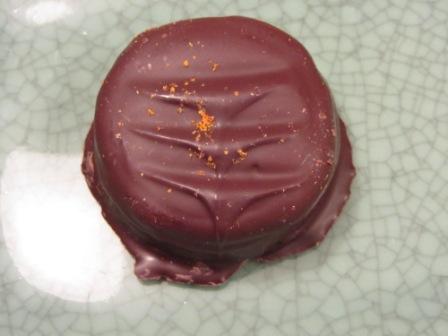 Appearance: a deep, round chocolate-coated shape, with a delicate dusting of bright orange peel powder on the top.
Orange element: a layer of Seville orange marmalade
Aroma, flavour and texture: faint chocolate aroma. Biting into it, one discovers that the fine dark chocolate coating conceals a layer of light sponge, topped with a layer of sticky Seville orange marmalade – noticeably orange-flavoured and not overly sweet. The contrasting textures – thin, crisp chocolate, soft, light cake and yielding marmalade – work very well together, while the marmalade layer delivers a nice citrus kick which lifts it.
Verdict: a sophisticated take on a retro favourite.

Packaging: Deep orange square cardboard box with a dark brown disc saying Willie’s Cacao and the chocolate used: Cuban Baracoa 65
Appearance: A single square of dark brown chocolate, with Willie’s Fruity Cacao incised on it.
Orange element: 0.1% essential orange oil
Aroma, flavour and texture: on opening the sealed wrapping, the scent of the chocolate itself is dominant. Biting into the rather dry, firm-textured chocolate, one gets a noticeably bitter chocolate flavour at first with very subtle citrus notes coming though next and a very acidic finish.
Verdict: Bracing - one for lovers of dark chocolate 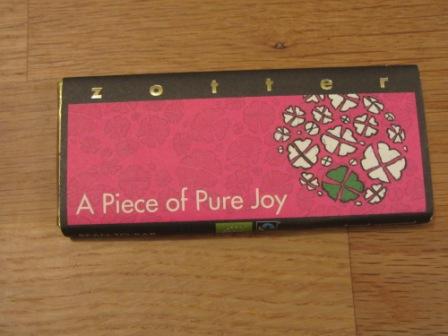 Packaging: Raspberry pink packaging decorated with a shamrock pattern in white and green.
Appearance: A simple, one-piece, pale-brown milk chocolate bar, about 1 cm thick, with a faint ripple pattern in the chocolate.
Orange element: the ‘orange cream’ inside the bar
Aroma, flavour and texture: on unwrapping the gold foil, a very faint orange scent. The filling inside the milk chocolate is a pale fudge colour and has a soft, creamy-foamy texture. The flavour – from both the milk chocolate and filling – is predominantly sweet, with a slight citrus note and a pronounced alcoholic finish from the 4% ‘orange liqueur’ and the 2% ‘blood orange brandy’ .
Verdict: too sweet for my taste, with the booze the dominant flavour note. 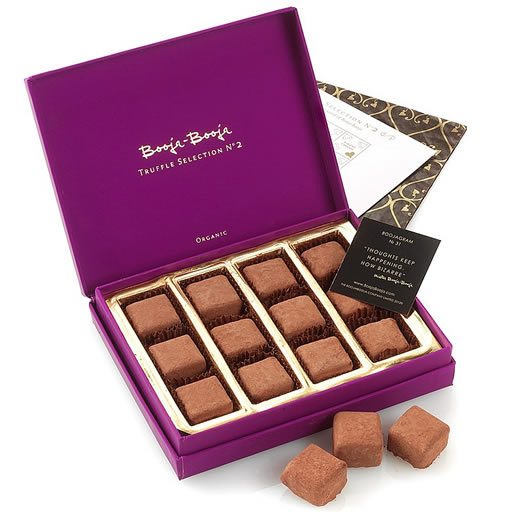