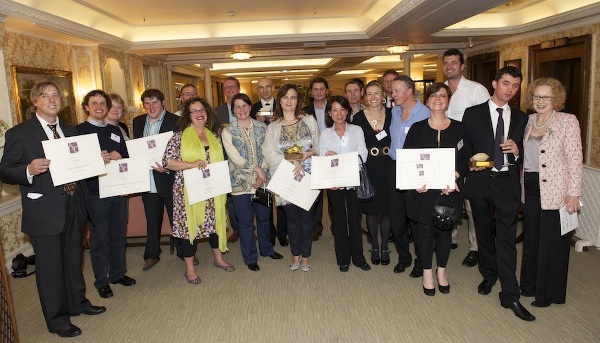 Leading chocolatiers from around the world gathered together in the elegant surroundings of Fortnum and Mason’s, London, last night for the celebratory Academy of Chocolate Awards party – the UK’s chocolate equivalent of the Oscars.

Ever since it was founded in 2005, the Academy, in the words of its founder Sara Jayne-Stanes, “has sought to educate people about the difference between real chocolate and chocolate confectionary full of sugar”.

Sarah Jane Evans, Academy member and wine and food writer, confirms this: “Our aim when we were founded was to talk about the fact that chocolate comes from the bean and to understand the process from bean to and to introduce the idea of fine chocolate. The fact that the Academy includes food writers such as myself and Marie-Pierre Moine as well as professional chocolatiers is very important as it offers an independent aspect. The ethos of the Academy is that everyone leaves their commercial interests at the door. We spread the words through these bi-annual awards, events and conferences. ”

Chantal Coady of Rococo, a fellow member, is convinced that the Academy has done much to spread the word re fine chocolate. “It’s been very influential. Let me give you some examples: nowadays, there’s very little artificial vanillin used and people are aware that chocolate should contain cocoa butter rather than other fats. People are also becoming more aware of the ethics of cocoa-growing.”

Another valuable role of the Academy  in Coady’s opinion is as a meeting place where “chocolatiers can meet each other as part of the same group, talk together, be collegiate. Of course, there’s an element of competition in the chocolate world but as far as I’m concerned it just means that I have to try harder to make even better chocolate.”

The Awards are the result of a long and intensive judging process by a large panel of judges. Crucially, all entries are anonymous and those with a commercial interest are not allowed to judge in any category for which they’ve entered. Sipping English sparkling wine and fine Quintal port, the audience of over hundred clapped and cheered as the Bronze, Silver and Gold winners across a range of categories from Best Bean to Bar Dark Bar to Best Dark Truffle were announced.

Each year a highlight of the ceremony is the moment when the Academy announces its prestigious Chocolatier of the Year award for the person who has won the most Gold awards that year. “This year we have not one, not two, but three Chocolatiers of the Year,” announced Sarah Jayne-Stanes proudly. These were, in alphabetical order: Laurent Couchaux of Rococo, William Curley and Keith Hurdman of Thorntons.

For the winners of awards, recognition through this rigorous judging process is important, particularly for those with fledgling chocolate businesses. One such winner was Duffy Sheardown of Duffy’s, who came recently to chocolate-making from a background as a motor racing engineer, and not only won Golden Bean for his Honduras Indio Riojo 72% but also the Brilliant Newcomer award. “It just shows that if I can make chocolate, anyone can,” he declared modestly while accepting the Golden Bean, skimming over the huge amount of time and experimentation he’d put in behind the scenes.

After the ceremony, he told Chocolatier.co.uk “People in the chocolate world have been so friendly it’s fantastic. Paul A Young has been so supportive, stocking my chocolates and encouraging me when I’ve been feeling low.”

Winning Gold for Best Filled Chocolate with their Coconut Pandan was a great boost for Cocoa Red; “We’re based on the Isle of Man where we’re the first fine chocolate producers, so it’s great to be able to come to an event like this in London.”

Another happy winner was Paul Wayne Gregory, who scooped three awards for his filled chocolates and is on a mission to bring out a retail box filled entirely with chocolates that have already won awards; “The Academy of Chocolates is highly respected, so winning awards here is very important.”

“When we first started the Awards we had 60 entries; this year we had over 450 entries from all over the world,” says Sarah Jayne-Stanes happily. “When I set up the Academy I would never have imagined that I’d be standing in Fortnum’s surrounded by all these people from the chocolate world. Two great French chocolatiers have opened shops here – Maison du Chocolat and Pierre Hermes  – which was unimaginable just a few years ago. Great Britain really has come of age as far as chocolate is concerned.”

Find out more about the Academy of Chocolate and see the full list of award winners. 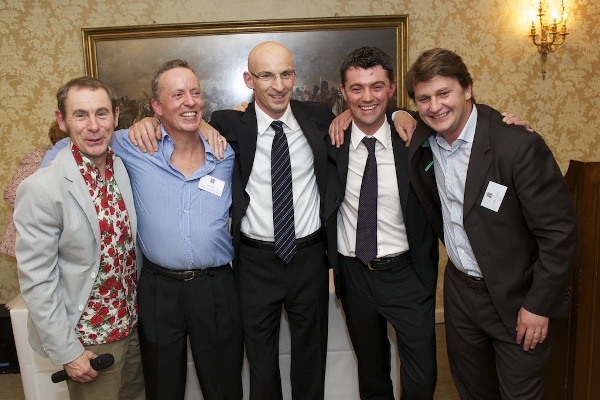 Pictured: Winning Chocolatiers of the Year.