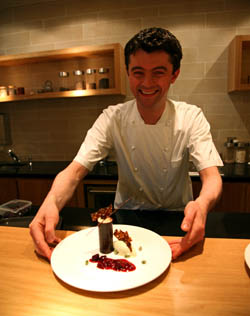 Four times winner of the prestigious Academy of Chocolate’s Best British Chocolatier Award in 2007, 2008, 2009 and 2011, chocolatier and patissier William Curley is noted for both his distinctive chocolates and his exquisite pastry, on sale at his own William Curley shops in Richmond and Belgravia. His introduction to the world of chocolate came about through his work as a patissier. “I started working at Gleneagles when I was 17-years-old as a pastry chef,” says Curley, “It was a traditional hotel training. It was very important to me  to learn about everything which came under pastry and that included chocolate.  Even in those early days, I realised that chocolate was a medium I liked working with.”

Acclaimed as a patissier,Curley went on to work at Michelin-starred establishments including Pierre Koffman’s  La Tante Claire and Raymond Blanc’s Le Manoir aux Quat’Saisons, garnering awards en route and also meeting his wife, Suzue, an acclaimed patissier in her own right, while Chef Patissier at the Savoy.

William Curley’s chocolates, like their handsome black and gold brocade packaging, are at once luxurious and sophisticated, characteristically pairing a voluptuously smooth, rich ganache with intriguing flavours  such as rosemary and olive oil or and juniper berry and blackcurrant.

“Quality is prime for me,” explains Curley. “Working at Michelin-starred establishments where the need to use best ingredients is drilled into one, means that I always want good quality.” Key to the quality of William Curley’s chocolates is the fact that he uses Amedei’s acclaimed chocolate,  meticulously  produced in Tuscany.  “I’m their ambassador in the UK. They have the same philosophy as we do. They want their product to be the absolute best. When you’re using great chocolate like Amedei you don’t want to overpower it. All their chocolate is Criollo and Trinitario. They use good quality beans, but I think their particular thing is that they conch it really well – longer than most, so it’s more smooth and more elegant. It goes on and on and on. In chocolate I look for length, flavour and no bitterness. Ten minutes after you’ve had it, you’ll still get flavours coming through.”

“I’m very particular,” he observes, “ I don’t use any preservatives. Everything is natural.” This reliance on fresh ingredients means that his fresh truffles only have a “two week shelf life.” Not surprisingly, this has implications for production. Easter and Christmas are “horrible,” Curley admits.  “I can’t make in advance, so I also try to offer more ambient things like caramelised nuts or honeycomb, so people shopping early for presents have got something to buy.”

Curley’s own first shop opened in Richmond in 2004, with Curley working upstairs in the kitchen. “I did three years in Richmond and by the end we had six people in a tiny kitchen; it was crazy.” Production is now based in his Twickenham workshop. “I’ve  now got a dehumidifier to take moisture out of the air to prevent blooming and a fridge for cooling, so I can make a better product. We still make the ganache as you would at home – boil the cream, melt the chocolate, mix them together until they emulsify nicely like mayonnaise. Once smooth we add the butter and either pipe by hand or place it in a frame.”

As the business has grown, so the range of flavours on offer has increased, though these too are all created using natural ingredients. “Companies come round with boxes filled with pipettes of flavourings. They look great, but why would I use a rosemary flavour when I can go out into the garden and pick a fresh herb?” A characteristic hallmark of William Curley’s chocolates is his use of Japanese flavours. “That’s Suzue’s influence,” laughs Curley, “I’ve spent a fair time in Japan. I’m fascinated by their culture and I brought ingredients back home with me to play with. Japanese black vinegar is one of our iconic flavours and toasted sesame is massive for us. We’ve got a big Japanese following; ten per cent of our customers are Japanese.”

Although there are around 40 rotating flavours, Curley eschews novelty for novelty’s sake. “There are some flavours that I’m so chuffed with that I’ll never change them,” he smiles. “ When it comes to creating flavours, I get inspired by eating out, travelling, trying new ingredients. I’ll give you an example. I might go to Paris and realise that French chocolatiers use aniseed with chocolate; it’s a good combination. But what I do then  is rather than just do the same, I give it my angle, so I use tarragon, which has an anise flavour, and combine it with mustard. Apricot and wasabi, for example, is effectively my take on chilli chocolate.”

As well as his original, bijoux Richmond shop, Curley opened a second,  discreetly chic shop-cum-café  in Belgravia, a few minutes’ stroll from Sloane Square, in 2009. Elegantly decorated with taupe-coloured walls and light wood,  the Belgravia branch comes complete with an eye-catching  patisserie and chocolate counter showcasing his in-house creations and an innovative dessert bar. “The Belgravia site works really well for my London following,” he explains. Both shops are used as venues in which he runs workshops, master classes and events.

Educating both his staff and his customers is very close to Curley’s heart. “Our customers have gone on a journey with us,” he says. “When we opened William Curley in 2004 we certainly didn’t do half the flavours that we do now. Since we opened, especially in Richmond, people have learned to trust us. If we’d done at the beginning what we do now, people simply wouldn’t have bought them. We’ve run so many courses and tastings since we opened;  I like educating people about chocolate.” The desire to share his knowledge extends to his staff. “I have young people working with me,” he explains, “and I want them to learn how to do things, so we make our own praline, marzipan and fruit pates from scratch.”

Looking back on his career, Curley feels that the market for quality chocolate has grown enormously. “In terms of fine chocolate, until the 1980s the market simply wasn’t there in the UK,” he explains. “People just bought dark, milk or white, and the dark would be heavily roasted with lots of sugar added,  bittersweet rather than dark.  The 1980s saw the rise of better chocolate for chefs to work with. People began to understand more about cacao and the best varieties. There was education within the catering industry and there still needs to be more. I know some chefs who are very casual about the chocolate they use; it’s not important to them.”

For Curley the increasing buzz about quality chocolate in the UK is a good thing “The UK market for chocolate has evolved; these are very exciting times. It’s healthy that there are a few people doing good chocolate. There are some chocolatiers that I really respect; competition keeps you on your toes. It’s great that there’s a huge potential audience for fine chocolate.” 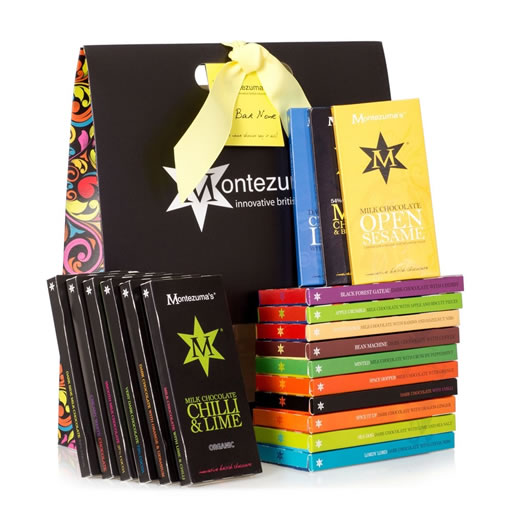 Lawyers turned self-taught chocolate makers, Helen and Simon set up Montezuma's, a company producing ethical chocolates. They produce a selection of chocolate truffles, hot chocolates, and other chocolate treats, as well as a range of gifts for all occasions. Their chocolate bars range includes contemporary flavours alongside milk, dark, and white chocolate options.