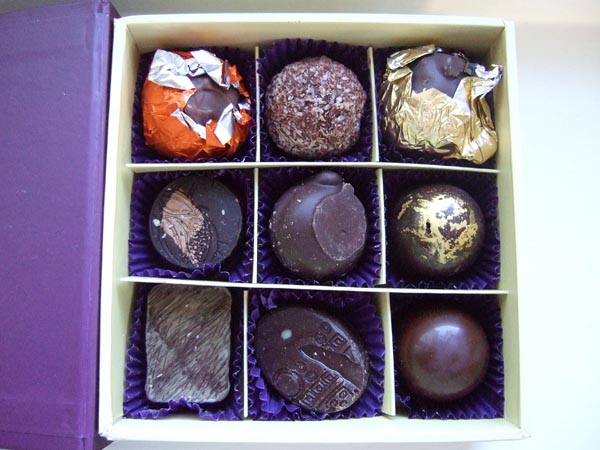 Some folk love winter: the chance to go for bracing walks, to cosy up by the fire, to snuggle under woollen blankets, and to drink a tot of brandy or three, are all part of the season's appeal. I have to confess that I'm not one of those people. For me, the only saving grace of the cold is the food. Pot roasts, meaty slow-cooked stews, sturdy puds, warming spices, and the occasional injection of citrus - and I'm almost won round. Almost.

And now, it seems, I can also add chocolates to that list. Paul A. Young has for some time produced chocolates to reflect the different times of year, so it's an appropriate time to see what he has to offer by way of a selection for winter.

As with all Paul's creations, they look beautiful - each a mini work of art, individually decorated according to their flavour profile, and presented in Paul's trademark purple and gold box (no seasonal change here), secured with gorgeous ribbon in the same colours.

But, as they say, it's what's beneath the frippery that counts. Sumptuous packaging and exquisite decoration will only get you so far.

My box contained nine chocolates. Four of them could be taken from a pudding menu: pumpkin pie, treacle tart, banoffee pie, and lemon cheesecake. The pumpkin pie is like a mini chocolate-based and covered version of the real McCoy, and - unlike so many pudding versions, isn't overly sweet or stodgy. Instead, the whipped-light centre has all the flavour of pumpkin, with a touch of the graininess and chewiness that characterises pumpkin purée.

As someone who was all but raised on treacle tart, this was one chocolate I was particularly looking forward to. The milk chocolate casing gives way to a fudgy ganache that doesn't quite deliver for me - I'm left wanting more a buttery, treacly hit rather than the hint I actually get. Don't get me wrong - it's good. It's just not one I'd rush to have again.

By contrast, the banoffee pie is a triumph. A crisp dark 66% Ecuadorian chocolate outer shell encases a suitably rich banana and caramel filling and a crunchy chocolate crumb base. It's everything a banoffee pie should be, and more. It has a surprisingly clean finish, too, for such a potentially sugary bonanza. I love it.

And lemon cheesecake? The initial rush of lemon is wonderfully lip-pursingly intense, but fades quickly to a mellower, mild soft cheese flavour. The distinct layer of (non-chocolate) biscuit base has all the flavour of a true cheesecake while being less claggy in texture than is often the case with the actual dessert.
A more obvious nod to the autumnal season comes from the blackberry and elderflower chocolate, promising as it does something of a Proustian moment, filled with memories of long, warm days spent hedgerow a-gathering. I'm not entirely convinced that what I taste quite achieves that: jammy blackberry is to the forefront, but lacks that little kick of sharpness that comes from eating the fruit itself. The elderflower is barely there - the merest waft across the tongue. Nevertheless, it's a very pleasant mouthful.

A greater triumph, to my mind, is realised in Paul's other hedgerow creation in this box - rosehip and orange. First, the delicate dark chocolate shell, then distinct and zingy citrus and sour notes from both the fruits, together with a touch of coffee-like, medicinal bitterness, instantly refresh my tastebuds. This is possibly my personal favourite from the entire selection - a real evocation of the season.

Sadly, the coconut molasses chocolate arrived damaged, resulting in an oozy mess best consigned to the bin. While I had to forgo this particular one, fortune would have it that I happened to try a sibling version a couple of weeks previously. Dressed in a coat of lightly toasted coconut, this snowball of a chocolate isn't as innocent as it looks. Bite into it and you get a big, thick lick of, well, deep and dark nutty molasses. It's every bit as divine as it sounds.

No selection of Paul's chocolates is complete without his trademark, multi-award winning salted caramel. It's a beautifully balanced, smooth liquid caramel, neither too sweet nor remotely bitter, with just an edge of sea salt, and covered in a dome of perfectly matching shiny dark chocolate.

Finally, I'm left with 'garlic'. It's typically Paul A. Young in that I suspect few others would even dream of garlic and chocolate as a likely combination. In Paul's hands, however, the pairing makes complete sense. The garlic is slow roasted until caramelised, and then turned into a fabulous rich, sweet dark ganache which somehow retains the faintest garlicky tang. It's all covered with Duffy's fruity 70% Star of Peru, making for a wickedly indulgent truffle.

In short, it's another selection of hits for Paul A. Young, and one should go down well with anyone who's after exceptional chocolates with a seasonal difference. And - who knows? - with a box of these to hand, even I might finally be converted to the merits of winter after all.